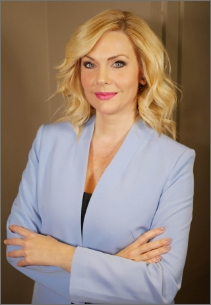 Emi Livaniou – Zisiopoulou is one of the most renowned anchor women of Greek television.

Since 2013 she is head of Special Editions at the Huffpost.gr, one of the most influenced sites in the world. She has been on numerous reporting field trips in the United States as well as Europe. She has travelled extensively in Africa and the Arab World.

Since 2012 she publishes the annual review “The Power of Giving” which is under the aegis of the Ministry of Education and displayed at the website www.dinamiprosforas.gr

Emi Livaniou-Zisiopoulou is a Law School graduate and has attended extra courses at the Law School of Robert Shuman University in Strasbourg. She is a graduate of School of Professional Journalism.

She has also attended journalism seminars at the Leadership Institute in the USA and Greece.